Munt Cottage is listed on the Historic England and British Listed Buildings websites as "The Munt Cottage".

House. C16 and earlier. Timber framed and plastered with thatched, gabled roofs. Of one storey and attics, but with 2 storey crosswing at south west end.
The main range has 2 gabled dormers. The crosswing was formerly jettied and has multiple bracing exposed on the front, suggesting a C14 date.
A picturesque red brick stack is positioned at tile junction of the main and crosswing roofs.
The windows are C20 small pane casements. Internally some framing is exposed and a large inglenook fireplace.

The listing suggestion of a 14c date for the cross-wing as being contemporary with the time of the Black Death.

According BHO: in "An Inventory of the Historical Monuments in Essex, Volume 1, North West (London, 1916), pp. 18-21". British History Online

* (12). Cottage, now two tenements, on the E. side of the road, 120 yards S. of the church, with a modern addition at the S.W. end. The upper storey is gabled, and originally projected at the S.W. end of the N.W. front; it has now been under-built.

Munt Cottage has architectural features that date from the 14th Century. The crosswing is described as "formally jettied" in the Historic England listing. The original fourteenth Century structure is likely to have been of a "Hall House" construction. This would mean a single dwelling space that had a central fireplace and an opening in the roof to let the smoke escape.

The crosswing now has two storeys and the formerly jettied gable that faces the road could have been a Solar. The South portion of the crosswing was possibly open to full height and the open hearth located in this portion.

The 15th/16th century part of the cottage was added at the same time as the chimney stack and the two Inglenook fireplaces.

The roof of Munt cottage is thatched and it is presumed that this has always been the case. However, the structure of the roof under the thatch is largely 20th C. Most of the original timber has been replaced, the rafters and ridge board are all modern. The supporting structure of the roof are still the medievil timbers and have many features suggesting that they are recycled from maritime use. Many mortise holes are still visible which do not seem to relate to the current construction, although this is over 500 years ago! Some of the timber can only be described to have "Rigging Holes" although I cannot confirm this.

As with the framing timbers seen on the front of the Crosswing they are "rough hewn" and many of the original timbers in the roof structure still have bark from the trees that they were cut.

Sadly most of the original truss construction of the roof is no longer to be found. However, the beam in the upper crosswing shows evidence of a King post and the mortices of supporting trusses in the framing beams. There is no access to the roof section in the crosswing as it is obscured by 20th C. plaster board.

Some of the framing is still visible internally.

Munt Cottage was originally of Wattle and Daub construction but is now largely covered in cement. There is an "honesty panel" on the North Wall that exposes the original construction. In addition, the Wattle and Daub can be seen in the East gable of 17th C. part of the house where an access to the roof had been made. Sadly when the 20th C. addition was constructed and modern utilities added, such as electic lighting and central heating, the work was less than sympathetic to the heritage of the building.

The Cottage has a surviving "Diamond Mullion" Window and it has evidence of the shutter that was in place to "weather-proof" it when it was the window type that was in use in the 14th C. The windows in the rest of the Cottage are 20th C. but another "Diamond Mullion" window has traces of its existance in the window facing the road. This elevation of the Crosswing has the exposed framing which idenifies the building as 14 C.

Munt Cottage is probably the oldest surviving dwelling in the Belchamp Walter community. The Crosswing, if built in the 14C, pre-dates the current Belchamp Hall by approximately 300 years. The inhabitants of the Cottage and the Medievil Hall are not known for sure but it is likely that the Cottage was within the estate controlled by the residents of the Hall.

The dwellings prior to the Black Death were all demolished apart from the Medievil Hall, which survived until it was replaced in 1720/21

The main cottage is another example of the "Baffle Entry" plan. 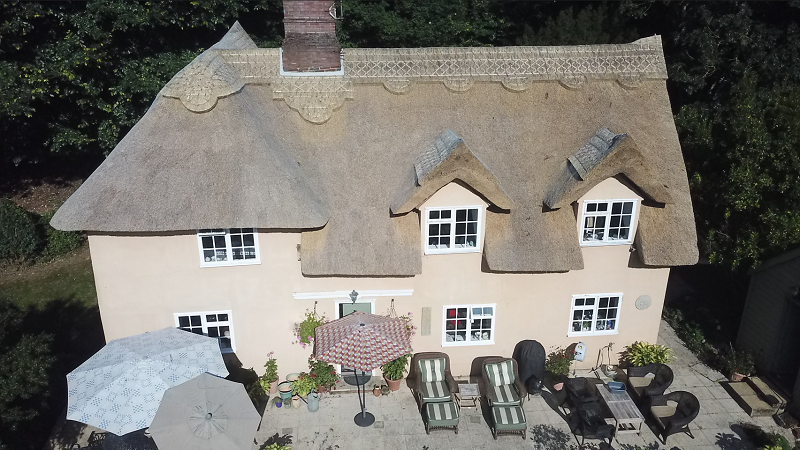