The Three Living and Three Dead

This is a Medievil wall painting/mural in St. Mary the Virgin, Belchamp Walter. The Three Living and Three Dead are lacking the Three Dead. My suposition is that the 19th Renovations destroyed them. Such was the disregard of the Victorians for history.

Rather than just being "plastered over" (paintedchurch - Anne Marshall), the Three Dead occupied the wall space that in now the buttress on the North wall of the Nave, behind the organ and to the left of the chancel arch. The arch was also reconstructed in the 19th century and later highly painted - now white-washed over. 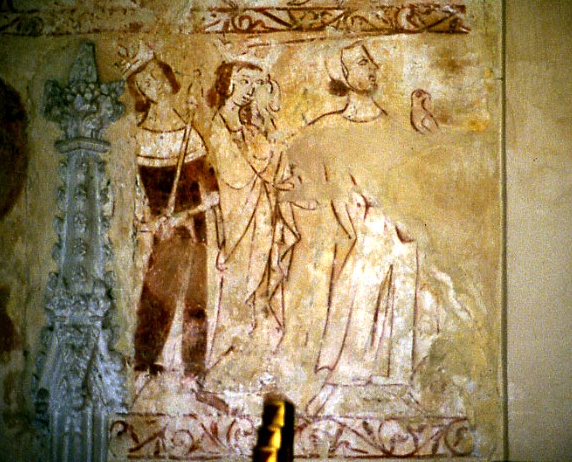 If you compare the wall painting above from the church with the painting below from the British Libraries collection of the 2nd Earl of Arundel (Thomas Howard) there is a lot in common.

The illustrated manuscript's rendition of the Three Living shows the three figures as we see in St. Mary's in poses that are almost idendical to that of those on the North wall. The coronets and the hawk are seen painted in similar positions. The mural is somewhat cruder, but this is only to be expected due to the medium.

The date of the manuscript, 1308-1340, would make it contemporary with the Murals and before the death and memorial of Sir John Botetourt to whom the chantry chapel was built. As it is not known who painted the murals, and even if they were by the same hand, I would assume that they were either painted at a similar time to the chapel construction or they were intended to be part of the chapels decoration. In any case they were likley to have been painted over when the tomb and chapel were desecrated by those sympathetic to the Cromwell parliament. 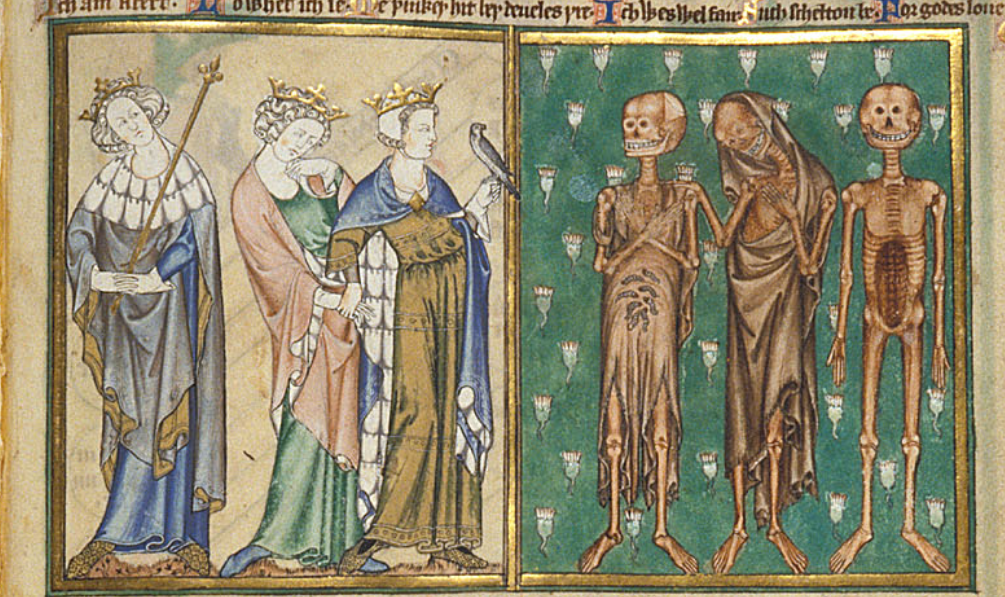 Below are some quotes from the British Libraries blog about the illustrated manuscript relating to the Three Living and Three Dead.

The dialogue between the two groups is sometimes explicit, as in the relatively early example above from the early 14th century De Lisle Psalter (Arundel MS 83). Beneath a miniature of three kings encountering three corpses is an abridged version of the Anglo-Norman poem Le dit des trios morts et trios vifs which describes the ensuing conversation. Interestingly, above this double-register miniature is a series of inscriptions in the English vernacular, giving additional voice to the characters. The Three Living cry out: ‘I am afraid’ (Ich am afert), ‘Lo, what I see!’ (Lo whet ich se), and ‘Methinks these be devils three’ (Me þinkes hit bey develes þre). And the Three Dead reply: ‘I was well fair’ (Ich wes wel fair), ‘Such shall you be’ (Such schel tou be), and ‘For God’s love, beware by me’ (For godes love bewer by me).