This mural, to the left of the entrance to the church on the South wall, is the "mystery painting". There are various interpretations on whether it is actually a depiction of a Wheel of Fourtune or Saint Sebastian, who was wounded with arrows shot at him, the archers leaving him for dead. His wounds were healed by Irene, widow of the martyr Saint Castulus. 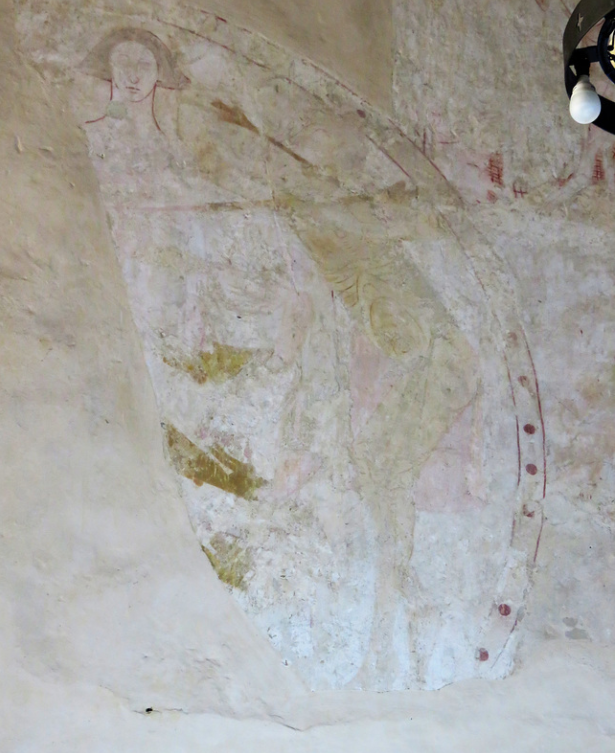 The photograph above was taken from the Stillleaf-Ipernity website. A photo taken by the webaster will be posted as soon as it can be taken. Please visit the Stillleaf website and see his other fine photographs.

The condition of this mural is not good. There is definitly a wheel and arrows. The photograph above shows what could be an image of a woman (Irene?), I am not so sure - it looks more like a repair in the plaster.

I am not sure why I have this here. I think that this was in Stiffleafs description of the mural. Here he/she speculated that the mural was insome way re-worked from an earlier work. The depiction of St. Sabastian having his wounds tended are not necassarily anything to do with the "Wheel" myth/story.

The Mural in Ilketshall St Andrew is quite different in its composition but the author of the paper describing the murals found in the Suffolk Church makes reference to the Belchamp Walter Mural and suggests that it is now identified as "the Seven Deadly Sins". 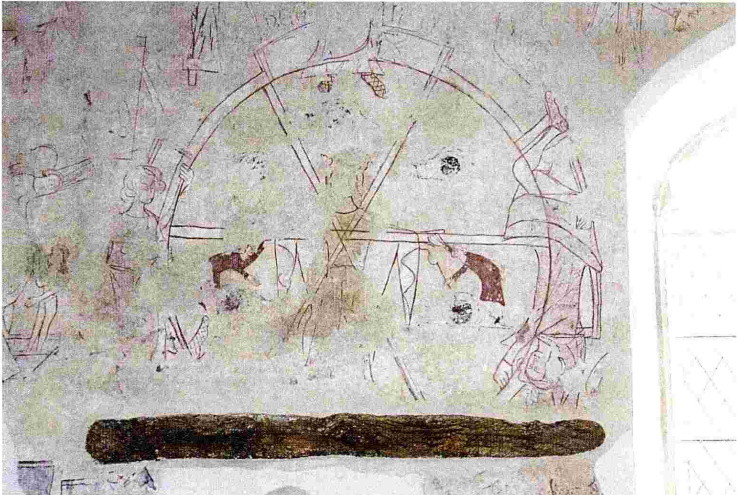 The "Seven Dealy Sins" interpetation may well be more in keeping with the St. Sabastian story.

The use of the "Wheel of Fortune" at first thought may not be seen as being very ecclesiastical in nature. However, in keeping with other Medieval motifs - including the Pelican, are popular methods employed by Medieval artists to illustrate a moral story.

In addition, the "Wheel" construct has been widely used throughout the artistic world to illustrate the concepts of Religious and political instruction. The Wikipedia page on Rota Fortunae explores this in greater detail. Even Shakespere uses the imagery in Hamlet and Henry V:
"slings and arrows of outrageous fortune" and, of fortune personified, to "break all the spokes and fellies from her wheel."
and
Henry 5 act 3, scene VI:
"........ And giddy Fortune's furious fickle wheel ......."