Mmmmmm!
Menu A reluctant Reuser Why I don't use Facebook
tempusfugit.me.uk

Having been told thet "Facebook was the way to go" and seeing that a lot of the people I currently know seem to be frequent users I thought that I would take another look.

I think that this is the fundamental difference in my experience and that which others seem to be having. While I do have a (fake - i.e. not in my real name) profile I do not have any friends as I have not accepted any requests, although I have had many. The pupose of my profile is so that I can log on to Facebook to see what is going on.

It seems that all I can see is other Facebook users Public Profiles (this is always public I think) and their Public posts. Most Facebook users post so they can communicate with their friends, while ths makes sense it makes the viewing by a random "non-friend" a pretty boring exercise.

The consequence of making the majority of a Facebook profile private is that all a "non-friend" will see is that the person or entity that they are interested in seems to spend most of their time updating their profile picture, as this is all you can see.

This also applies to Public Posts. Due to the effects of concerns regarding privacy, in particular the "data breaches" that have been current in the news - Cambridge Analyica as an example. I see very few public posts on profiles that I have found making a search within Facebook. Not being a regular user of Facebook I have not made many posts and have not bothered to "fine-tune" my security settings.

"Friend-only" posting is why Facebook is not going to be a solution for event promotion.

I would guess that reccomendations on security settings that is suggested that you set this to "Friends" not "Public".

By Social Media of course I mean Facebook. Facebook is ever going to be a really viable solution due to its nature. Not everyone has or wants to have a Facebook account. The reasons for this are many fold. In any case the only way it could be of use is if the profile has Public posts and even then they will only be seen by others with Facebook accounts.

Those who do not have Facbook accouts are ever going to see posts even if they are linked from a website. In that situation the person clicking on a link to Facebook will be prompted to login to or join Facebook. Then there is still the problem with "public" posts.

Having become frustrated with the users of Facebook to conduct seemingly "private" discourses between themselves while beleiving that they are "sharing" with the World at large I created a seconed Facbook account in my real name. On the positive side it did give me the chance to re-review my thoughts on the platform.

Generally, my concerns remain the same. I have commented many times on how I hate the interface but that I think is secondary. I am not really sure whether posts on my profile that I created to access a Group will be seen on that Group. Posts on the Group appear on my "named" profile - I don't want this, if I want to see what is posted on the Group I will go to that group. I am assuming that now that I am a memeber of the "Group" that other memebers of that "Group" can see my new personal profile. I am not sure if I am comforatble with that. It is not that there are things that I don't wnat them to see, as don't intend putting anything there, but it is not why I signed up. I have other means to post my thoughts to the Internet and I think that Facebook is surplus to my requirements.

" A reluctant re-user of Facebook. I am making this post to see how it appears on my page. It is not a question of cosmetics but more one of visibility and privacy. Before I post anything to Facebook I want to know how that post can be seen and by whom. It is not that I am a particularly private person but I have a hard time in rationalising how Facebook is loved and reviled at the same time. Fears of the lack of privacy and the danger of data loss seem to be perennial. However, if this is really the case then there must be an aspect that overrides these fears and enncourages Internet users to participate. I don't get it!
I made the post above "Public" - the default is "Friends only" - I am wondering whether this is noted by most users. Why would you want to make any post other than to your "friends"? "

The other thing that I don't understand is that the "Group" was "promoted" to me by people who are not part of that Group. I am assuming that they are "friends" outside the group and that is how they know each other and how they communicate between themselves. I am sure that they also communicate by email which is confusing as I thought that was one of the reasons to use Facebook??! Never-the-less, I do think that email is genrally too much trouble for the general Facebook and WhatsApp user as it is far more "oonvienient" to use on their mobile devices. I am not saying that this is a bad thing, but I don't use my mobile device to communicate.

I think that the main problem is that the users of Facebook don't know how Facebook works. In my estimation Facebook, and other Social Media, is too convienient in relation to other methods of communication. This is born out by the fact that emails to those related to the reason that I created a new profile do nt appear to chack or at least respond to regular emails. In addition, the delivery of fliers offering assistance for those vunerable to the Coronavirus Covid-19 was greated with no addtional visits to the websites mentioned on the fliers. I did get some "likes" that I made on the Facebook group that started the assistance initiative.

The flier that we distributed around the Village has both the Village Hall and Parish Council websites and a name and telephone number of a person that is not a member of the Facebook group. I don't know if there has, or will be, any response to the telephone or email and unless the person joins the group I am not likely to, but there was no outcome on the websites.

There is something sinister here: 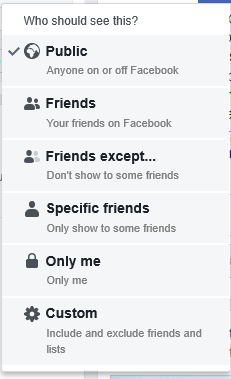