This page is a description of the Mill and its use throughout the history of the Belchamp Estate. It is not a review of the holiday rental. If you are interested in the history and the operation of the water mill then please visit my main page on the Village relating to the Mill.

Eventually, the content from the village page will appear on this page. If you are looking for information on the rental then please visit the Belchamp Hall website. 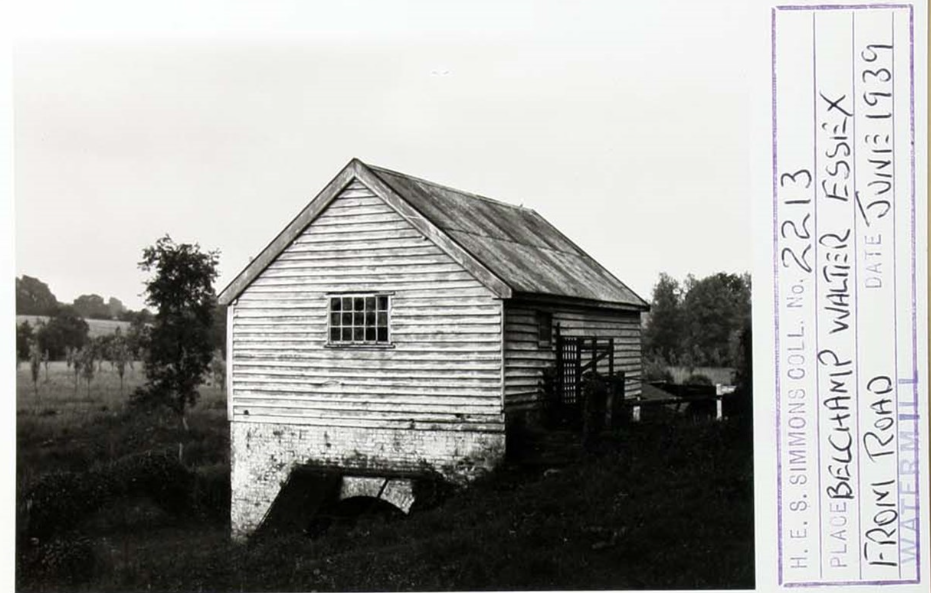 The photo below shows the mill pond at Belchamp Walter, probably from the 1930's. You can see a road over a spillway that supposedly acted as a floodgate. I presume that this shot was taken looking West (see map below), the mill would be to the left and Mill House to the right. Again, the actual route of the water course feeding the water mill and pond is no longer to be seen. 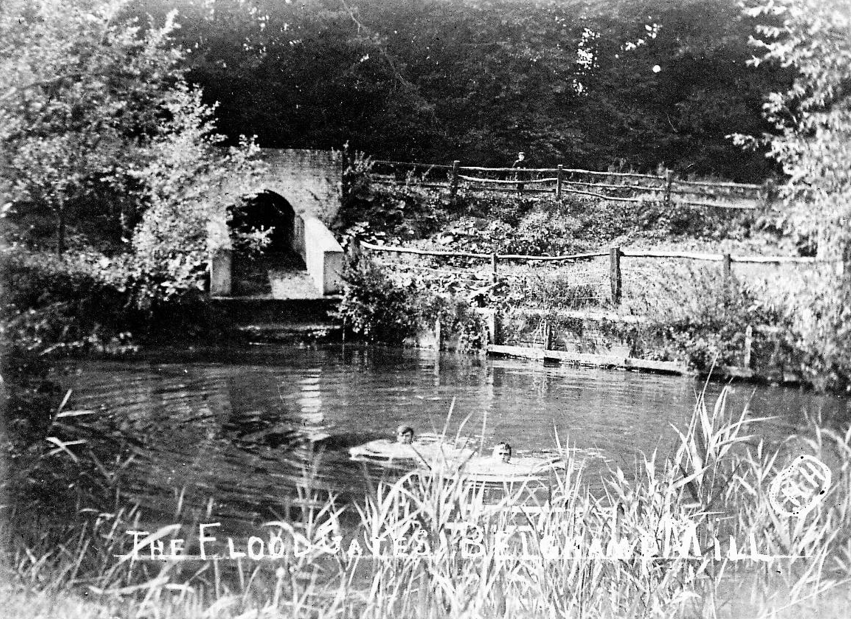 The map below shows the position of the mill with respect to the brook. The direction of water flow is shown in the drains surrounding the Mill. The drain from the Mill Pond crosses the meadow to join the Brook at the footbridge. This drain is at the bottom of my garden is is now pretty dry. 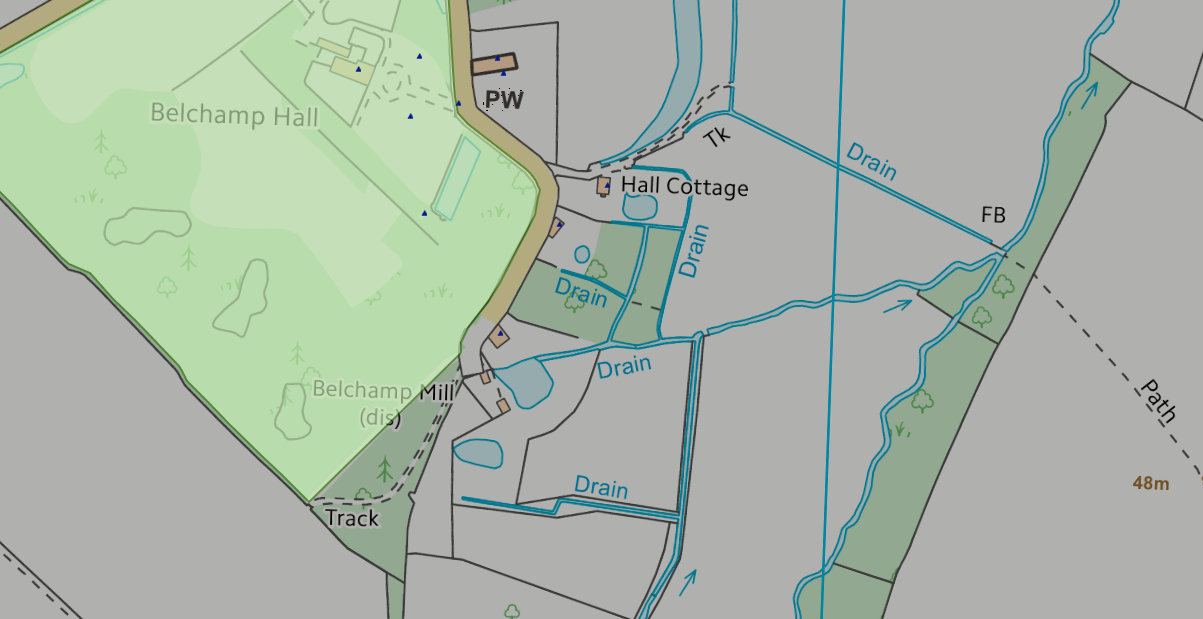 The above map was taken from the historicengland.org.uk search map and is licenced through the Ordnance Survey Public Sector Mapping Agreement for the use of Ordnance Survey mapping and data.

A small three bay, two storey, half brick and half timber-framed watermill lying at a short distance south of the mill house and immediately west of the mill pond.
Presently covered with corrugated iron sheeting its roof is gable ended but incorporates a catslide which projects out over a centrally positioned lucam along the eastern elevation.
The mill adopts a simple rectangular plan but unusually is built into an earthen bank which conceals the majority of its western lower storey, particularly the NW bay and the path of the mill tail. A low brick lean-to with a corrugated roof projects from the northern wall out over the former wheel pit. The upper storey, including the lucam, is weatherboarded and the lower is mainly built in C19 red brick, although the brickwork of the western wall appears to be earlier.
The external C19 brickwork is painted using bitumus paint and laid in an irregular English Bond. At ground floor in the eastern wall there is a heck-type (halved) door opening into the southern bay with a taking-in door immediately above.
There are no openings in the central bay below the lucam but a large hatch door is present to the north and in the former area of the hursting. Small windows in the lucam, northern and southern bays are later additions and supplement a pair of unusual and elaborate two-centred arch headed windows present in the southern gable end wall. Access from the west is gained via a door which opens directly into the northern bay at first floor level. A length of brickwork which presently is battering back the earthen bank to the south of the mill could theoretically be the remnants of a predecessor.

The interior of the mil had been completely cleared of all technology. At ground floor no evidence of the waterwheel, the gearing to the stones, auxiliary drives or fixtures and fittings remained. A half round brick arch in the northern wall integrates the wheel pit with the body of the mill and specifically the northern bay.
The first floor is supported on two heavy re-used binding joists, intentionally positioned to provide a narrower central bay to support the lucam. A sack hatch remains central to the first floor and various mountings remain attached to the floor joist soffits.
The west wall is partially rendered (against the damp caused by the earthen bank) and includes an earlier blocked brick archway lying below the present west door. No access to the first floor was gained but the roof, dating to the C19, was seen to be a side purlin construction with a ridge plank. The mill is starting to suffer from a lack of maintenance. The brickwork shows signs of localised subsidence in the form of cracking, some small areas of weatherboarding are missing and the corrugated roof, although weathertight appears to be nearing the end of its life.

The adjacent mill house was mainly destroyed following a chimney fire in the early 1990s. Although damage to the roof and upper storey was extensive the mill house was rebuilt in 1992, incorporating the remnants of the surviving timber frame.

A structure in the roof of a mill that projects out from the building to allow the hoist to winch up sacks clear of the mill and give protection from the weather.

Compared to the later map the pond that is shown in the photograph (with the children swimming) is somewhat confirmed. The pond with the sluice gate (flood gate) shows that the road had been diverted from its present location and passed to the left (right on the map) and past the lucum. At present there is a bank on the opposite side of the mill and the road continues to the West of that bank. The mill race as shown on the earlier map is quite significant but is now not in evidence.

The map also shows a structure that is more substansial that the stable block that curently exists. This structure is now termed as an "agricultural building" and planning permission to demolish it and be replaced by another holiday rental was applied for in 2019.

The photos below come from the planning application to convert the derilict mill into a holiday rental.

The photographs above show the location of where the water wheel must have been. You can see the corrigated iron roofing of the lean-to on the North wall, as seen below.

The mill was not in good shape in 2005 and the black clapboard was in a state of disrepair. The landscaping around the building still shows the track on the left of the mill. The current location of the track is now to the right and the bank with the entrance to the 2nd level has been excavated further.

The lucam is still part of the current mill building but there is no longer a track under it so sacks of corn could not be raised and lowered by it. You can see the Lucam on the right of the left photograph.

There have been several articles found relating to the Water Mill. The mill was in full operation in 1866 and 1868, advertisements were placed in local newpapers offering milling and malting services.

To be sold by auction in the latter part of June, Belchamp Walter Water Mill, at the Four Swans Sudbury.

BELCHAMP WALTER ESSEX.--Mr. G. Cardinal has been favoured with instructions from Mr. Ruse to sell by auction, the WATER CORN MILL, MALTING, BREWERY AND RESIDENCE, solely in consequence of ill health of the proprietor.

There is also capital pastures adjoining the premises and three acres of first rate Meadow-land upon Belchamp Common, the whole containing EIGHT ACRES and TWO POLES, and is delightfully situated in a first class corn district, five miles from the market town of Sudbury, seven from Clare, and six from Halstead.

The premises are of a most substantial character and are in perfect repair, and all the fixed machinery and going gears, with the timber upon the estate, included in the sale with exclusive right of fishing. A lucrative trade is now carried on, and the purchaser may have immediate possession, so that he can enter at once into one of the best businesses in the county. Further particulars and Conditions of sale may be had from W, Dowman, Esq. Solicitor, and of the Auctioneer.

The owner in 1862 was Mr. Ruse. It is presumed that the business was purchased by Mt Fredrick Copeland prior to 1866:

The water mill in the pretty little village of Walter Belchamp was totally destroyed by fire last Friday. The place is now a wreck, the building nearly levelled and the machinery rendered useless.

At about 10, Mr Copeland the occupier, who had retired to rest was alarmed by a crackling noise proceeding from the mill, on looking out he found flames darting from the building, assistance was promptly secured and the engine from Sudbury was sent for, they were soon at work under the directions of Mr Edward Hills and Mr Charles Wright. Nothing could be done to save the mill but the brigade prevented the fire extending towards the dwelling house and sheds. It is supposed that the fire was caused by the overheating of bearings in the machinery. Buildings and stock were valued at £ 1500 and was insured by the Manchester Office.

A Victorian brewery was on the site, as well as the pub. Raymond Pike tells us:My 2 times Great Great Grandfather George Gross purchased the inn when it was the Lion. He enlarged and improved it adding a market room, billiard room, and renaming it the Four swans. After his death, in 1867, his wife Mary Ann and son ran it. Before the Four Swans my Grandfather had been the inn keeper of the Christopher inn in Sepulchre street Sudbury.